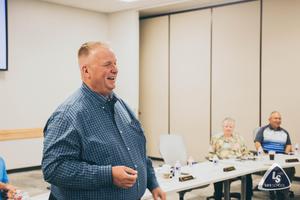 Retiring with an inspiring legacy at Life School, former Coach and Director of Athletics, Andy Chester, was celebrated during June's board meeting.

After announcing his retirement of 31-years in education, beloved Life School Coach and current Director of Athletics, Andy Chester, was honored for his inspiring legacy during June's monthly board meeting.

“Life School will miss him greatly,” he emphasized. “It has been an honor to work with such an amazing human being.”

Serving at Life School for the past 13-years, Chester started the athletic program at Life School Red Oak in 2006 and became the District Athletic Director in 2008.

Putting the school on the map in the athletic arena with much success, Chester has been applauded throughout his career for holding a standard of playing the game without sacrificing the character and integrity of the team.

“Coach Chester has mentored me over the years, and trust me, that is not easy,” laughed Justin Burns, Life Middle School Waxahachie’s Athletic Coordinator. “He always has the wisdom that I need to hear.”

“He is quick to share with you a mistake he made when he was younger, and if he had to make that decision now, after years of experience, what he would do differently,” he added.

“Chester is a true example of the ‘LifeLeader attributes’ he taught to others,” recollected Jennifer Wilson, Life School’s Chief Culture Officer. “Ethical leadership, self-awareness, resilience, collaborative, and humility are a few that were evident as he instilled the values of teamwork and living with a purpose beyond self.”

Continuing to develop coaches and students without wavering in his values, Chester witnessed and enhanced the district’s rapid growth, tripling the numbers in the athletic programs. This year alone, out of 27 varsity sports teams, 23 teams qualified for the State Playoffs – which also included six District Champions and the school’s first Team State Champion.

“Coach Chester may be retiring but as long as I have his phone number, he will always be the first person I call when I need to make a professional decision.” Burns articulated.

Even though the transition is bitter-sweet for the district, Chester is passing the baton to his well-equipped successor - Assistant Athletic Director, Scott Thrush.

“Andy Chester has been my teacher [and] mentor but more importantly one of my best friends over the past 12 years,” Thrush recalled. “He has always had patience with me and coached me through my most difficult times. He taught me how to navigate through those tough times and to keep working hard to get better during the easy times.”

“[He would tell me] ‘Never stop learning or you will get passed up,’” he acknowledged.

Though Chester’s last day as Director of Athletics will be August 30, 2019, he will continue with the district as part of the Culture Team to serve the mission of Life School in a new capacity.